The case of the leaking RX-7 flasherbox CPU capacitors

A friend of mine asked me to fix her RX-7 "CPU".  Seems these things are really hard to get these days.

A little research turned up a bewildering array of names for the thing.  Depending on where you look, people are calling it a CPU, the "CPU #2", a flasher box or flasherbox, a turn signal relay, turn signal CPU, or "that box that lives in the footwell".

The box in question is a rectangular black plastic box that lives in the passenger side footwell.  It seems to run the turn signals, dome light, and a few other non-essential bits 'n bobs in the car.  I found a diagram somewhere on the net if you're curious.

It also seems that there have been various flavors of the thing.  Not all boxes are compatible across all models.  Who knows why.

One common theme seemed to be that these units were prone to broken solder joints over time.

Opening it up, it seems like the thing does have a little bit of sorta intelligence to it.  Although I did not see anything that jumped out immediately as a microcontroller, there was an NEC chip I did not bother to identify.  So calling it a "CPU" may or may not be a stretch.

In any case, examination of the PCB showed various areas of corrosion.  What you are looking at, dear reader, is rust underneath the green soldermask coating of the board. 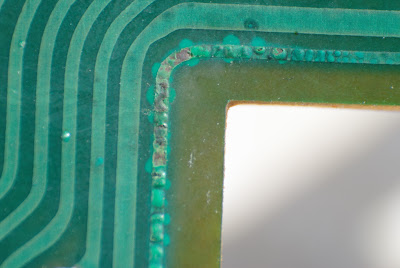 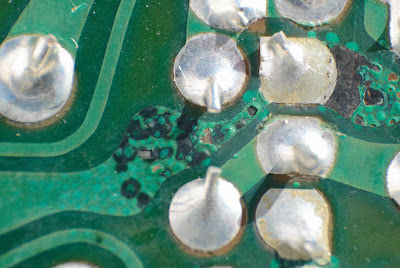 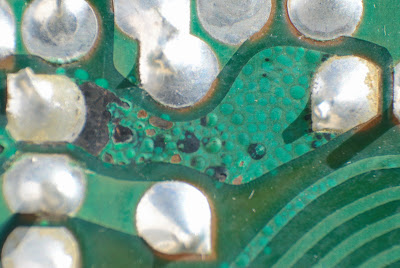 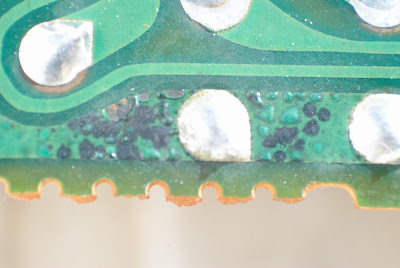 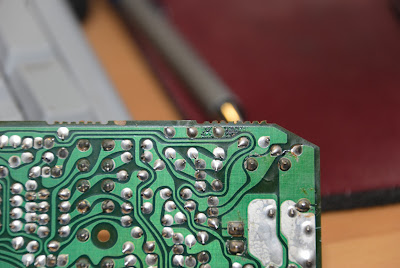 Fortunately I have seen this before.  Owners of certain now-discontinued sports cars (not RX-7s) will remember the infamous "leaky capacitors" problem that affected many engine computers (ECUs).  All of the corroded areas were underneath or near electrolytic capacitors, so that made if fairly obvious.

Now, I have to give Mazda credit - they used nice quality 105*C capacitors in the original design. But nothing lasts forever, and at least three of the seven capacitors were leaking and rotting the board.

The affected caps had discolored leads that had a green tinge to them, and one of them smelled a little fishy.  Literally - it has a fishy smell.  More pronounced when you actually heated up the joints to remove it, you can tell.

Some of the thinner traces along the PCB edge were not by caps.  They may have rusted out themselves.  There were also various scratches and scuffs on the PCB, so maybe it's been out of the casing before.

The fix is fairly easy:

If you don't instantly know what all of that means, have somebody help you.

Notes to those repairing: one of the electrolytics is a bipolar, which is not polarized.  The one in my box was not leaking, and I did not replace it.  Digikey does not have them, but Newark does.

Second, use 105*C caps only.  They are, in fact, much tougher than 85*C versions, as a quick call to any cap manufacturer will tell you.  I used higher-voltage versions whenever available.

Also, there are height and width restrictions on most of these caps.  Be sure to get versions that are similar in size. Size restrictions mean you won't always get higher voltage parts on the PCB.

Reports so far are that it works fine now.  No more whacking it with the foot to get 'er working again, or so I'm told.
Posted by Titam at 12:19 PM