This information would be good to know for anyone considering this system, but does not seem to be available.

It's not actually 16 mA for the full 2 seconds, but that's close enough.  Especially since the 2 seconds might be anywhere from 1 to 3 seconds - I did not bother to measure more accurately than that.

The sensors run on AAA cells, which I personally hate because of their relatively low capacity.  But, running the numbers, the effective capacity of AAAs should run these sensors for a very long time.

Assumptions:
-  Due to self-discharge and temperature effects, cells will only deliver 75% of their rated capacity.

-  I estimated alarm consumption at 16 mA for 4 seconds.  This is twice as conservative as the ~2 seconds I estimated from observing the unit current.

These work out as follows:

I would hope the 75% derating is conservative, but possibly not.  Newer alkalines do have a better shelf life than older types, but they are not known to be especially shelf-stable or stable under low current loads.  Freezing temperatures may also affect them.

Reviewers don't give any numbers on how long the sensors last, but I have the impression that 3-6 months may be typical.  Which, given how conservative the above numbers are, would theoretically put these people in the range of 20+ detects per day.  Given that the sensors do tend to false under certain circumstances, this doesn't seem at all unlikely.  Better positioning and setup might greatly extend battery life.

It is pretty clear that any way you cut it, larger (but still cheap) alkaline cells will dramatically increase the performance of the sensors.  Which is what you would expect, except that the expected time for puny AAAs is already so large, C and D cell run times go through the roof.

You would obviously have to hack these units to attach to these larger cells, but this is not hard.  See the interior of the sensor, where there is ample room to put additional wiring and a jack: 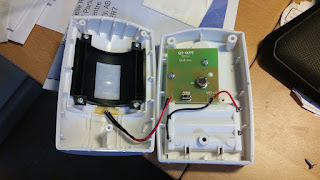 The main problems would be how to house and mount the larger battery pack so it's accessible, doesn't look bad, and is not subject to weathering, damage or vandalism.

I initially purchased lithium AAAs in an effort to get a better battery life - especially in the winter months - but they are very expensive.  Adapting to AA, C or D would have probably been less costly, and will still be less costly in the long run.  I'd also rather change the cells at my leisure in the summer rather than in the dead of winter.

With these numbers you could probably easily use NiMH cells, if you don't mind changing the batteries a bit more often.  At about 15-20 detects/day you should get about 4-5 months (or so) out of them, which isn't bad at all given that they can be used over and over again.  NiMH AAAs would give maybe 6-8 months, while NiMH C and D will be quite a bit longer.

Even assuming it is off, or you get more detects than expected, 9-12 months of life from a single set of rechargeable AAs is not bad at all.  And they are a lot less chunky than C or D-size cells.

These numbers also mean that if you have a high-traffic area, battery life drops precipitously.  For example at 75 detects/day, you can expect to get six weeks, and around 100/day you'll get about 40 days from alkaline AAAs.

If the sensor is always going off, expect to change cells very, very often, or adapt the sensors to use an AC adapter instead.  At 16 mA peak nearly any 4.0V-5.0V adapter will do the job.