Only one of Word, Powerpoint or Excel is using a French-language (or other language) keyboard

Problem:  One of these programs is incorrectly using an alternative-language keyboard layout (French, German, etc.).  The system keyboard is set correctly and all other programs work as intended.

Problem:  Macroworks suddenly and inexplicably starts coming up with the "Unit ID Conflict" error / screen, claiming one or more Xkeys has a unit ID conflict that was never there before.  Happens on a previously stable system.

In my case, I had a bad label printer that was causing my USB hub to reboot over and over.  This confuses MW and makes "see" the same Xkeys device over and over, making it think there are multiple identical devices plugged in when there is, in fact, only one.

Removing the offending printer stopped the hub reboots, which stopped the Macroworks error.

Per the Freedom Mobile Compatibility Checker,  my Canadian-model Galaxy S9+ (SM-G965W) should no longer work in the USA.  3G shutdown has taken effect, and phones without "LTE Roaming" - which is somehow different than LTE "calling" - are no longer functional.

So I went to a shit-ton of work to get alternative phones lined up - an S22 and an S10+ - for my upcoming business trips.  (The S10+ was the last model with a headphones jack.)

However, two separate trips from July 23 to August 04, 2022, to Philadelphia, PA and Denver, CO, show that my S9+ still works just fine on T-Mobile in the USA - even though according to Freedom, it shouldn't.

I tested the Samsung Galaxy S10+ and Galaxy S22 5G as well.  They both work too.

For reference, the S9+ did show LTE when calling, so it's not likely picking up on some leftover 3G kit that hasn't been decommissioned yet.  It did initially have a touch of trouble - the T-Mobile signal was weaker, so I think it tried AT&T first - but really had no issues beyond that initial hiccup.

It will register on AT&T but won't call/text, and won't register on Verizon at all, both of which are to be expected. In areas where you can't call, it's probably because T-Mobile coverage is bad, not because the phone is no longer working.

I am quite happy with this since the S22 felt like a downgrade: no headphones jack, a poorer fingerprint sensor, and a smaller screen than the S9+ or S10+, yet it does nothing that I need better than the older phones.  And I'm bloody not well paying $1200+ for an S22+.  I will be selling the S20 and using either the S9+ or S10+ depending on how well the S10+ fingerprint works.

Most of the advice out there concerning this topic is infuriatingly infantile, like "make sure advance on click is enabled", etc.

If you've tried the rest and your PPT still randomly stops on a slide and refuses to advance MANUALLY no matter how hard you try, and you're not in Kiosk mode or whatever, it is possible that your PC is just running out of puff and can't manage the PPT any more.

This obviously SHOULD NOT happen, especially with modern PCs, but it seems it might if:

•  You have "Do not compress images" checked in Options / Advanced; and/or

•  Your PPT output resolution in Slide Show / Monitors is set to a high resolution (either manually or by default).

It seems this combination causes Powerpoint to try to render your uncompressed images at a high resolution, which obviously strains the CPU / video card.

I find it incredible this is even a thing, but compressing images and setting the output resolution to a more manageable level stopped my PPTs from refusing to advance slides at semi-random points.  So it is obviously a thing.

I have older machines that have no issues with this - only my "modern" Windows 10 laptop is affected.  It's also the only one that operates at an insanely high resolution (3k x 2k), meaning it's most susceptible to this issue - especially with the relatively wimpy Intel onboard graphics.  An ancient Win7 laptop runs the same PPTs flawlessly.

Problem:  As stated, even though you have an SSD and nothing else is running.

Solution:  Counterintuitively, you have to disable hardware graphics acceleration in Powerpoint.  It is likely that will clear it right up.

Why you have to turn hardware-based acceleration OFF to get BETTER performance is beyond me, and one more example of how ridiculous things have gotten.

Yes, I know 2010 is very old now.  But it's possible this might affect other versions / systems, or even extend beyond Powerpoint itself.

Issue: The camera has a firmware bug that prevents zooming.

No, seriously, it does.

There is no fixing it since there is no firmware update utility.  Seems to affect "newer" cameras, as the "older" / original cameras don't have this problem.

Solution:  If the Logitech HD 920 Camera / Logitech Settings app doesn't work, just give up and get a C922.

No, really, just do it.  Don't waste your life trying to fix it.  Not only does the C922 not have this problem, but it is correctly recognized by the legacy Gaming Software (v9).

Important note: The Logitech page is idiotic and will state "There are no Downloads for this Version.  You must select an OS from the little drop-down at the left: 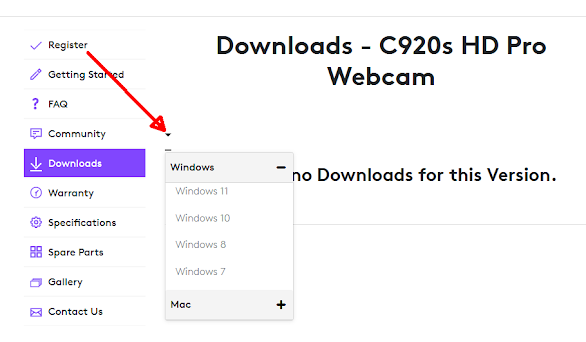 If you have no other choice, you can use Logitech Capture to process the camera feed on-the-fly to emulate zooming.  But it is a clunky workaround.

Note: This assumes your phone has the "+" or "Add" button in the APN settings.  If your phone does not have this, look elsewhere.

Also, you obviously need to know the correct APN settings for your carrier.

If you can "Add" an APN but the settings don't get saved / don't stick:

2.  Pull up your test / new APN again.  You may find that many of the necessary settings have now been pre-populated.

I don't know exactly how this works.  I assume the phone queries the APN server to get them.

3.  Start changing the settings from their defaults to the recommended settings, one at a time.  After each change, hit "Save" and see if the changes stick.

It is likely that at some point in the process, the "new" APN that you created and previously saved will simply disappear from the APN list.  This indicates that the last setting you changed was somehow invalid, even if it is the "right" setting according to your carrier.

For example, Petro-Canada Mobility says to set the Mobile Virtual Network Operator (MVNO) type to "None", but doing so will cause the APN profile to not save.  Creating a new APN with ONLY "rogers-core-appl1.apn" as the APN will pull the correct MVNO type (IMSI) and MVNO value (302720x98) to the phone automatically and allow the profile to be saved correctly.

"According to our system, your Google Account or one of the Play Gift Cards you submitted isn't eligible for appeal."

Problem:  You can't redeem a Google Play gift card, they need "more information", which you provide.

Then Google replies with "According to our system, your Google Account or one of the Play Gift Cards you submitted isn't eligible for appeal."  Meaning you've just lost your money.

Solution: It seems there isn't one.

The most likely explanation seems to be that gift card codes are being stolen between time of purchase and time of redemption.  Meaning by the time you try and redeem it, the funds are already gone.  But nobody seems to know for sure.

Although people love to hate on Google, it is not in Google's interest to deny legitimate customers use of their bought-and-paid-for gift cards.  Consistent failure to honor would destroy that part of Google's revenue stream.

The only solution, therefore, is to not buy Google Play gift cards.